As photographers we may feel our images quickly turn to be banal, trite – snapshots just like everyone else’s who are on holiers too. Isn’t there a simple way to change this? Wherever we go on vacation, family holidays, city trips or those dreaded brochure type popular beach destinations it can seem pretty pointless to photograph. At least to an artistic level. I guess most of us resort to the typical snapshot. Don’t get me wrong although, our family time is important and so are those precious moments. Those images have their place in our memories and hearts. But what if you can do both, have the artistic approach and the family pictures too? Without of course having the burden of massive professional cameras and the stress of waiting for the right light conditions. What if? So read on to find out how to add spice and creative juices while everyone involved is excited to join in.

My story goes as follows: I had decided pretty much last minute to ditch the digital camera kit and take only film along. But not 35mm small format, not even an SLR. Nothing so modern as automatic or auto focus for that matter. In fact my aim was to be as primitive as possible. Let’s go through the choices.

I had instantly thought of Polaroid for the adventure at hand but then decided against it. I found in the past that my Polaroid peel-apart camera always brought the wonder and magic of photography back to people’s imagination. That moment when you peel apart and reveal the image for the first time. Of course there’s also Instax or modern Polaroid Originals but for me it doesn’t have the same effect. However it is certainly a contender to any event or on a holiday. But I had 9 days of holidays and that would be a lot of film packs which I don’t have or can afford.

My next choice was medium format as it wasn’t going to be a landscape photography trip either. Mind you I had requested a few choices for locations as it seemed permissible at the time. It was to be a simple holiday. A classic sand and sun deal. So a straightforward no thinking kind of camera would have to be it. What kind of medium format camera can handle that? I chose to take two cameras. The opportunity to achieve artistic endeavours came from the simplicity of an old school medium format Bessa, rudimentary by nature and in terms of photography too. The bellows and lens of the collapsible Voigtländer Bessa can comfortably fit into a large pocket. Quite a feat considering that with a digital equivalent this is still impossible by today’s standard. The other one to keep boredom astray would be the basic of all, a pinhole camera – let’s talk about the Pinhole one at first in this post.

The pinhole type device is one of those awesome all day cameras. Operating easily in full glorious sunshine, while it still does require quite some time to fully expose the film. For the case of standard ASA/ISO 100 it’s about 2-4 seconds. You simply flip or slide the shutter open and count out loud. Making those around you quite conscious of your actions and the oddball coloured box sitting on a quirky wiggly three legged thing. I had brought along with me an original Gorilla-pod. One of those twisty things that you can wrap around branches and the top of iron railings to keep a camera stable. It’s kind of a tripod, which is equally practical as frustrating at the same time. Trying to get it just right to compose a shot can turn into an unwanted wrestling match. 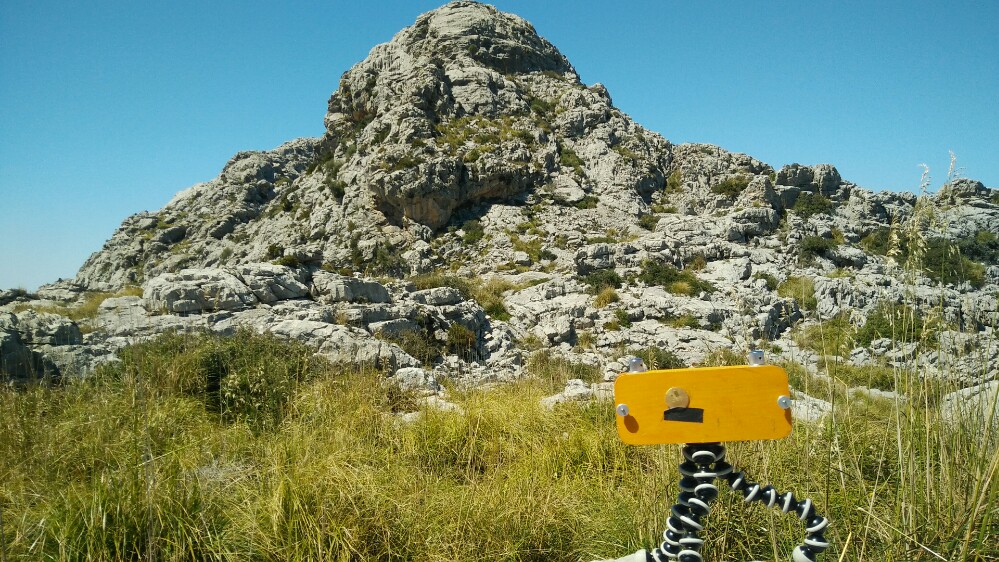 Driving the rental car as you do to see the sights in your own leisurely way had brought us to the mountains. As I said it wasn’t to be landscape trip. Nonetheless I could not help but use the super wide angle 6×12 medium format for a couple of shots of landscape and seascape later that day – that came apparent. 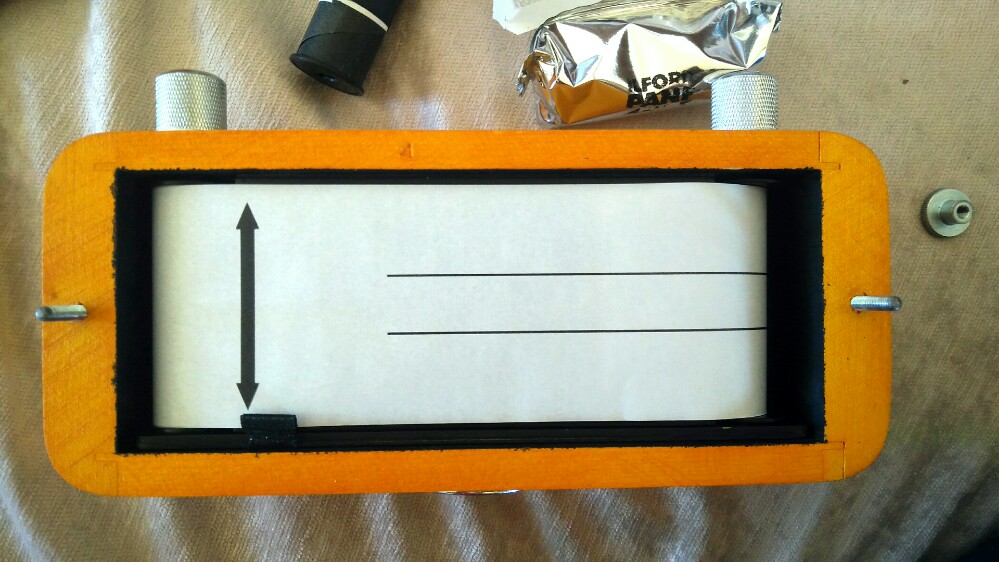 It’s often important to included love ones in these shots as well. Pinhole family shots are amusing and memorable at the same time.

Finally one of the pinhole shots where I’m actually at the top of the mountain. I’m that tiny dot at the peak! 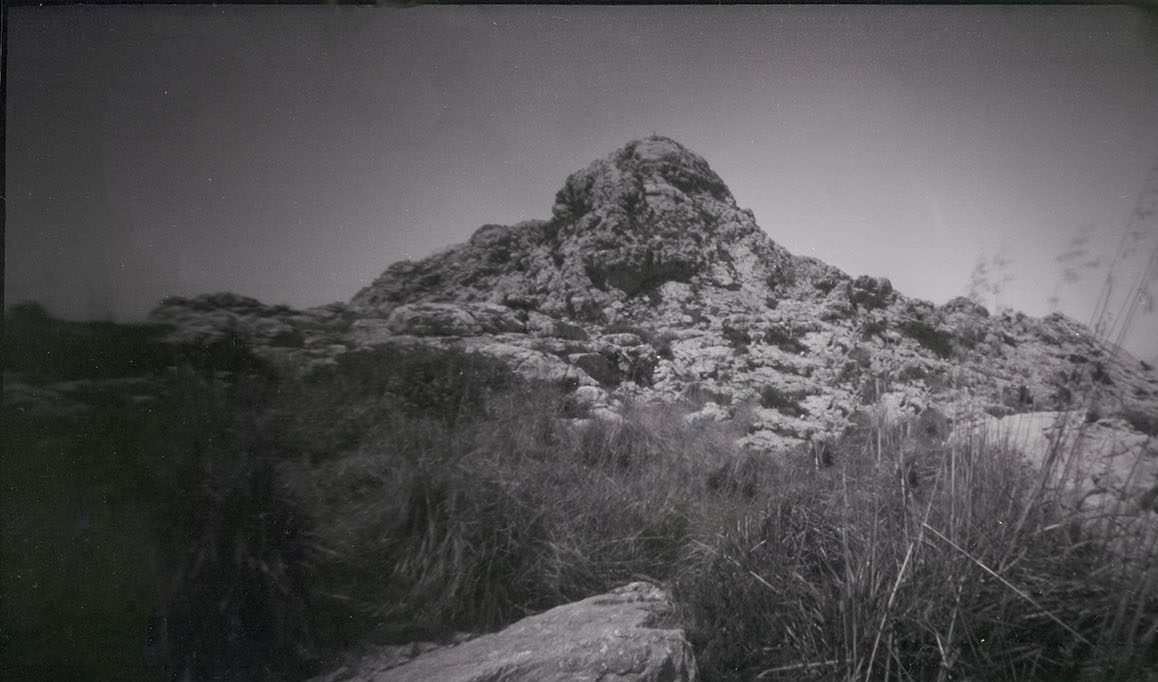 One thing about wooden cameras without lens is that there’s no real moving parts to be damaged by sand or dirt. Big advantage when lying on a remote beach. Simply throw the pinhole into the bag with the towels and swim gear. Nothing to worry about.

When cameras are devoid of electronics and motors to forward the film medium or setup the next image to be stored on a memory card, it can lead to double exposures being recorded. However beautiful little accidents await for us each day – if we notice and are willing to live with them. Accepting them as part of the creativity process. These happy happenings are especially true in the wonderful world of analogue and particularly in the realm of film photography. Those accidents are to be owned and loved at the same time. The golden yellow coloured exterior with its blackened insides makes up my handmade pinhole camera along with some brass fittings and metal rotating knobs on top. It is simple and elegant. Featuring a red filtered window to see the number of the frame on the backing of the 120 medium film. However sometimes you just plainly forget to move the roll of film to the next frame correctly. Missing to count evenly or oddly. You see, a roll contains twelve 6×6 shots and six 6×12 shots. But the indication on the backing is only for 6×6 so I’d need to skip a number each time to set up a new framing. In the excitement of things it slipped my mind resulting in a frame or half frame or two being overlapped. This of course created an extra long length of exposures of three images together. Which turned out to be like 6×24 rather than 6×12. This is how the image below came to be created.

By screwing into the bottom bracket on the underside of the box a gorilla pod I was able to get this image while crouching down. The side shot of the arch from right on the cliff’s edge.