We arrived at Annestown beach in Waterford, which appeared small and not too interesting at first sight. My father and I had been driving a good couple of miles through wiggly narrow and meandering roads, possibly in circles too. Wondering if the place that we were on route was going to prove fruitful, with only a blog post on the Internet by a ‘loneswimmer‘ and couple of snapshots to go on. There was a degree of uncertainty between us. Having come to rest in the beach’s car park, we noticed there wasn’t really any one around, a few locals nothing more. Well we decided to go and explore, armed with cameras and tripods to make use of day if nothing else. Heading between the coastal island to the left which encloses the beach. We started making images of seaweed and sea life as a warm up, carrying on this way for for some time. Then around the next corner, where the tall rugged rock walls surrounded us and there it was, a doorway through this island into some where else. This was to be the first of many arches we encountered along the way.

Awe by the discovery of such a simple and yet secretive arch hidden along the side of the rock wall. It was not visible from beach we came from. Only from the other side or by the sea this arch could possibly be seen. We were in luck as the tide was gone out for the next couple of hours. I made a few images at different exposures and combine them together manually to create the final picture. It’s about 3 1/2 metres in height, perfect for walking through, hence I named it the doorway arch! I don’t believe they have official names for them.

Technical bit : Because the light coming through the arch is much more brighter than the rock face surrounding it, I took multiple exposures, changing the shutter speed each time. In the post process I had the choice of using HDR or simply masking in and out the pieces of the images I wanted in Photoshop. I choice the masking option and used three out the six or five exposure I took that day. 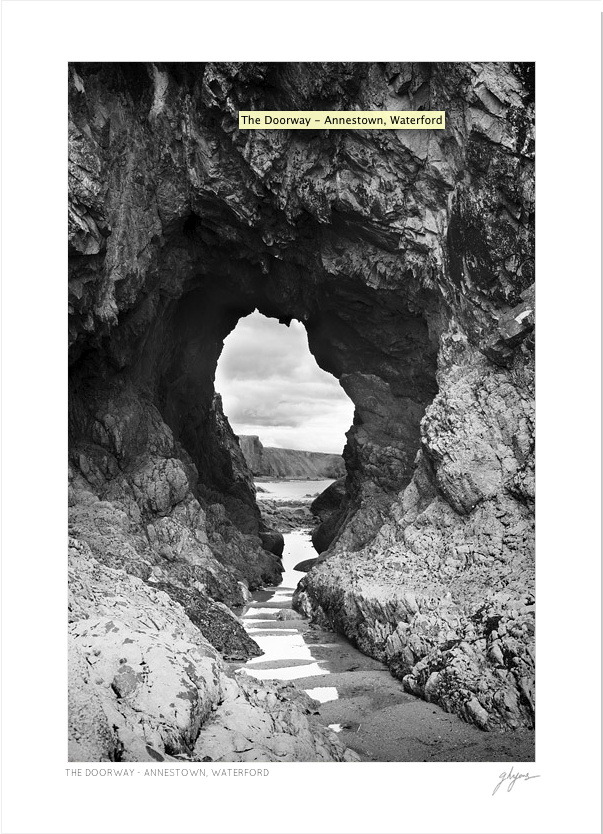 Shown below : The coastline we were exploring

Crossing over the inlet of seaweed and navigating ourselves through the rock pools we arrived on the other strand – a wild strand. We walked for a short while, than we notice something, was it another arch ? This was a kind of elegant arch small in size and height with straight and clear form of being an Natural Arch. The coastline here is wild and rugged but most of all untouched without any pollution or much human influence. Such a joy to still find these in secluded places when you think you know your own country. The picture below shows me standing under the arch to give an idea of scale and size.

Technical Bit : The image above I produced by taking three images and doing a HDR merge with some saturation adjustments in Photoshop

The coastline got more untamed with left over boulders and plenty of kelp and seaweed. We couldn’t resist but go on forgetting about the tide and the time too. Below is an image of the shoreline before Arch #3. They call this part of country the  Copper Coast and for good reason too.

Arch number 3, may not be as high or wide as the previous one, nonetheless it deserves a mention.

However from the other side, Arch No.3  is much more interesting for an artistic perceptive and of course for making an image.

Then when we had thought, that was it, another gateway inviting us onwards and ensuring that we did forget – the incoming tide. The perilous dangers of seeking sea arches, other treats and temptations had enticed and engulfed us!

The final artwork from the other side of the ‘last arch’

We had came this far a couple of miles walking along an impressive strand that we should finish it. I felt at the end of this piece of wonderful landscape that there maybe something else. Something waiting for us. Wanting to be discovered. Would it be worth the effort to keep on going or call it a day ? After all what we had uncovered, quite a small collection of arches so far. From a distance it looked interesting enough just to reach the end, we kind of owed it to the beach that we explore it’s enitre length.

When I reach to the end and decided to scale up the wall, excited by every steps until I reached the open above me. My father follow along and kept on photographing the many other intriguing features in the cliff face walls. At the opening I could sit across ways, saddled in with ease. It given me the view down into the ocean below on the left side. The other side the complete run of the beach I’d just walk for the last couple of hours. We had started at eleven and now it was around half four in the afternoon.

Below is the image of the opening on the right side. On the left there is an interesting rock formation too which should also be inspected. It’s a form of basalt, not complete as the basalt on the Giant Causeway in Antrim, Northern Ireland. But the volcanic effect of the rock’s state are clearly on display. It can be seen by the straight and shaped rocks on the cliff and sea cave walls.

This arch is obviously formed by the ceiling of a sea cave collapsing over time by tidal forces. It’s not possible to climb or enter down into the sea cave as the tide is strong and quite deep. It’s approximately 4 metres wide and much higher than that too. To find the true depth of the opening, you would need to dive down further.

Technical Bit: The image was taken using a 24mm Tilt and Shift lens to capture the top and bottom detail of the sea cave. The two exposure were than joined together. 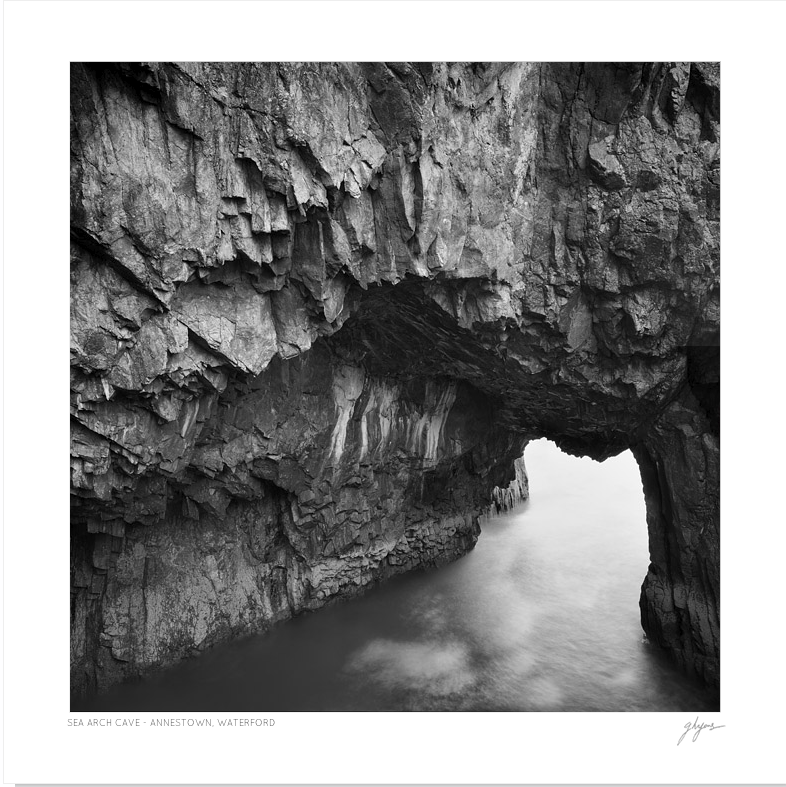 There are certain more natural arches in the area, which we hope to come back explore the wonderful Copper Coast in the near future.

Finally one more Arch we found on the way back after climbing the cliffs to get back out of the wild beach as the sea had locked us in. We had to double back and find a route between the cliffs to get up and onto the cliff path. Something you must be aware off – always have escape plan!

So here it is Island Arch which can be seen on from the Cliff at the begin of Annestown beach from the other side.

If you wish to see more of the Arches of Ireland, check out my other posts on this blog and artwork too. All images are avail for prints

If you like to go on an adventure why not join us and a photo trip – http://glyons.at/en/photo-trips-holiday 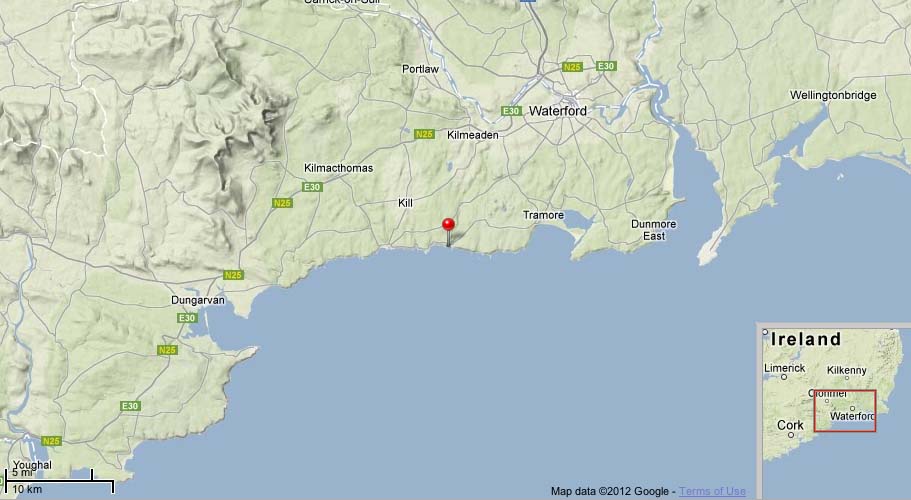 Wonderful photos. Isn’t it delightful when one finds something not on the tour route? It’s the best thing about traveling Ireland I think! People can’t experience the real natural beauty unless they go off on their own an forgo those expensive tours. The most beautiful place on earth!