The combination of photography and the outdoors has always been a natural extension to each other. When natural arches are added to this mix then a photo expedition turns into a quest. Searching for arches in the landscape really ups the ante when the sea is involved. Not knowing and patching together scraps of information and even rumours of such. To explore, discover and tell is what humans have been doing even before we could walk on twos. Along coastal trails and sculling over rigid sharp rock to glimpse downward ever scanning for an opening. There is much excitement, a faster pace in finding arches around the coast of Ireland. Of course a few are well known but most go unnoticed. Probably due to the extreme difficulty in the approach.  Sheer drops, loose rocks and slippery boulders can prove quite an obstacle. The Irish coastline is rugged and harsh. Arches are constantly exposed and carved by the forces of the ocean and time. This is where these wonders stand and have their home.

Firstly seeking out a natural rock formation is not a simple as it might sound. Maps hold little knowledge or markings of pin point positions, let alone any clear route to these features in the landscape. In the quest the use of old postcards, archives, a local bar or two assisted in directions and possibilities. The rumours are often true but their trails not. When one of these ocean doorways are encountered usually another arch is within range. The gift often keeps on giving.

In Annestown in County Waterford five were revealed along a secluded strand. Entry to this strand was through a natural door opening in the rock on the jugged land mass. The small peninsula separating the common strand from the hidden one. The last revelation was inside a large cliff face of basalt rock. After scaling the sides and taking the picture, the tide decided to come back ever so quickly. On this journey the sea had caught us. We scuffled back only to find the sea had started to flood the cove. The way we came was no longer accessible. The option of grabbing grass to retreat straight up a steep slope seemed a more pleasant solution then swimming against the tide. A close call. 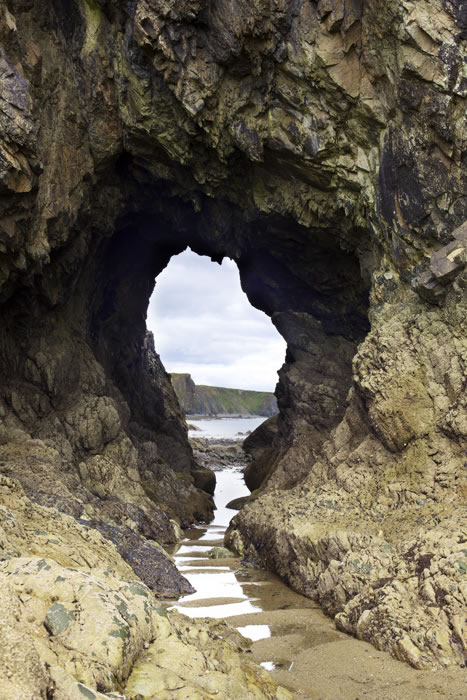 Arch #1 from behind – Annestown, County Waterford 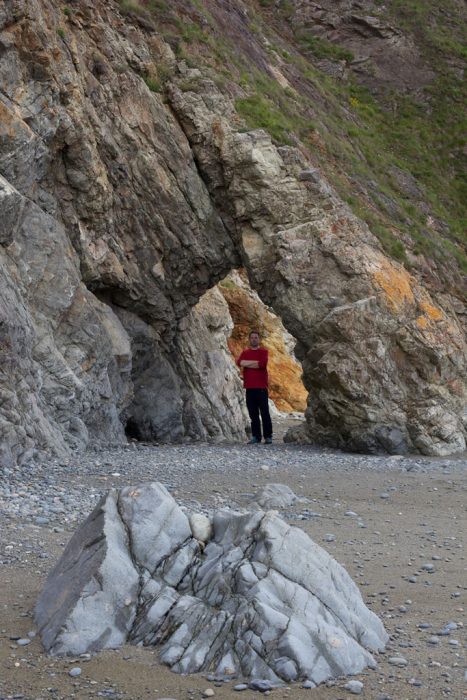 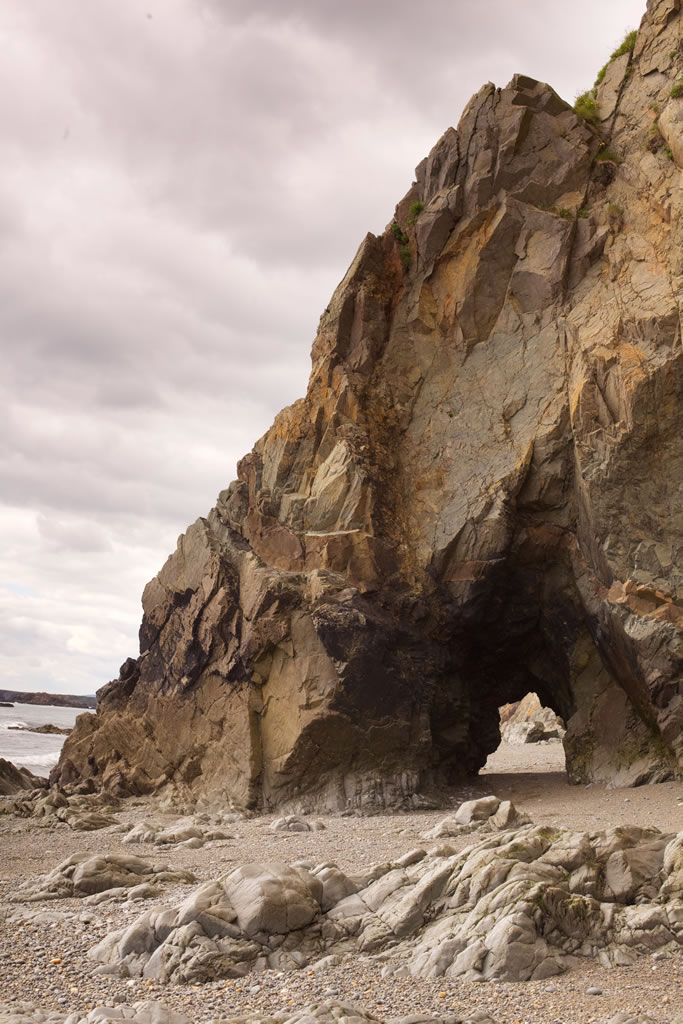 Arch #3  from behind – Annestown, County Waterford 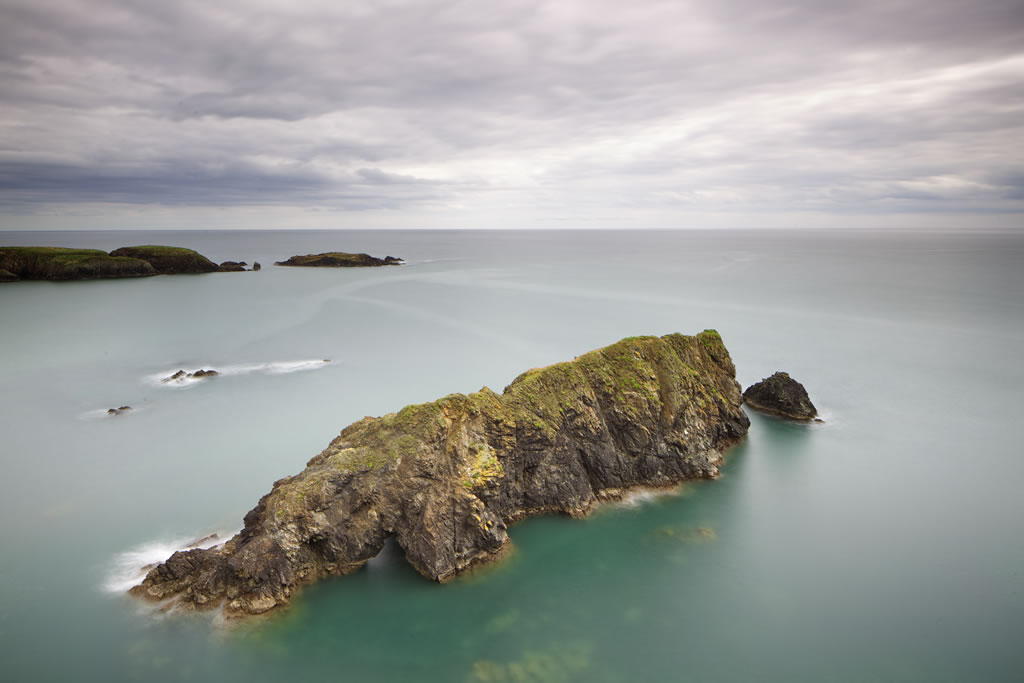 The Breeches in Donegal is a maddening place of unforgiving boulders and slimy stone structures. Laying across and squeezed into a tight point in the coastline. Quite easy to miss and worse still if the wrong approach is taken by foot. Of all the places this offers such beauty in a battered broken seascape. Accessing the Breeches at the level of the arch is not really too wise. A slip or a fall here is not recommended. It demands respect, caution and double thinking. Checking the tides against the sunset was essential for the shot in mind. Being brave here lead to finding two to three more arches before the sun started its setting. I left my father and slowly moved with watching each and every foothold I took. Hoping to find more. More was gladly found, with two arches together from the main featured Breeches arch. These were about 100 metres away behind the rocks and the incoming waves. It took a slow crawl of 20 minutes to complete. While at the other end thankfully drier a small arch was found. A opening in the rock wall kept warm by the low winter sun. 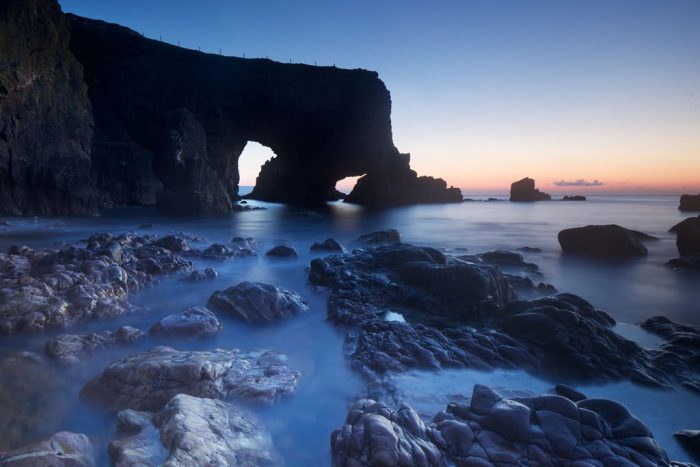 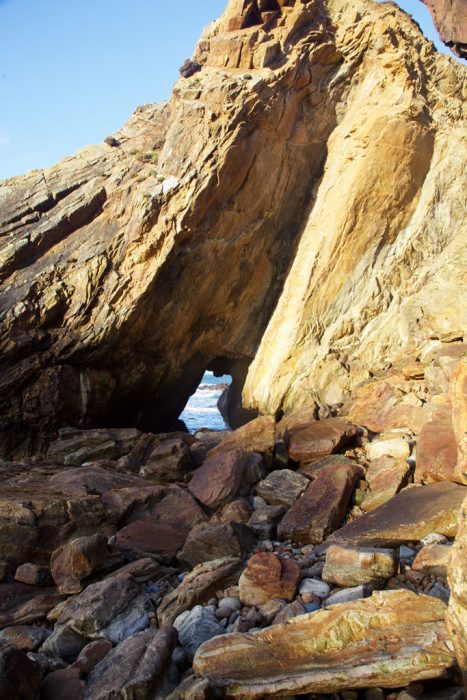 This is a well known glorious sea arch which stands separate from the mainland.  Located in a small cove south of the famous Fanad lighthouse.  This was one of the first we had photographed. Over the years  we got slowly hooked, each of our trips usually include an arch finding mission. 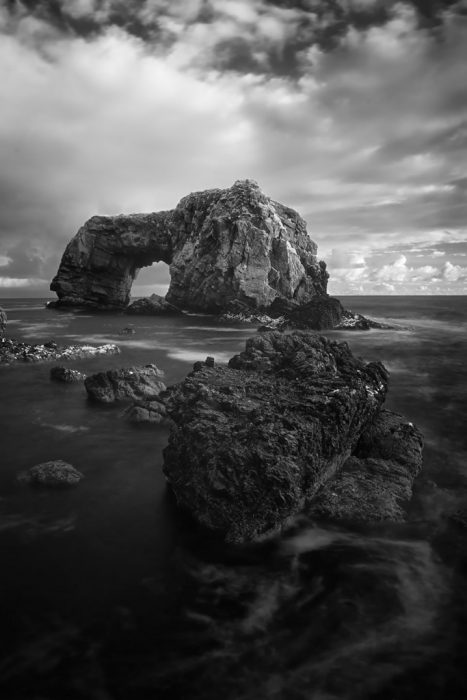 The Bridges of Ross, County Clare

The trip to the bridges of Ross happened on a day of storm and high winds. Strong and fierce with sea foam flowing overhead. Determined we braced ourselves holding the car doors stiff to prevent them swinging forward full into the wind. Hats were pulled down to ensure their position. Tripod legs shorten for stability when lying down close to the edge. Peering over the drop to capture the arch while feeling the ground rumble through the stomach. More excitement was ahead of us when it was spotted in the distance. Could it be? It was, under the point the ocean had opened the rock. The arch and the wild sea pressed against it. 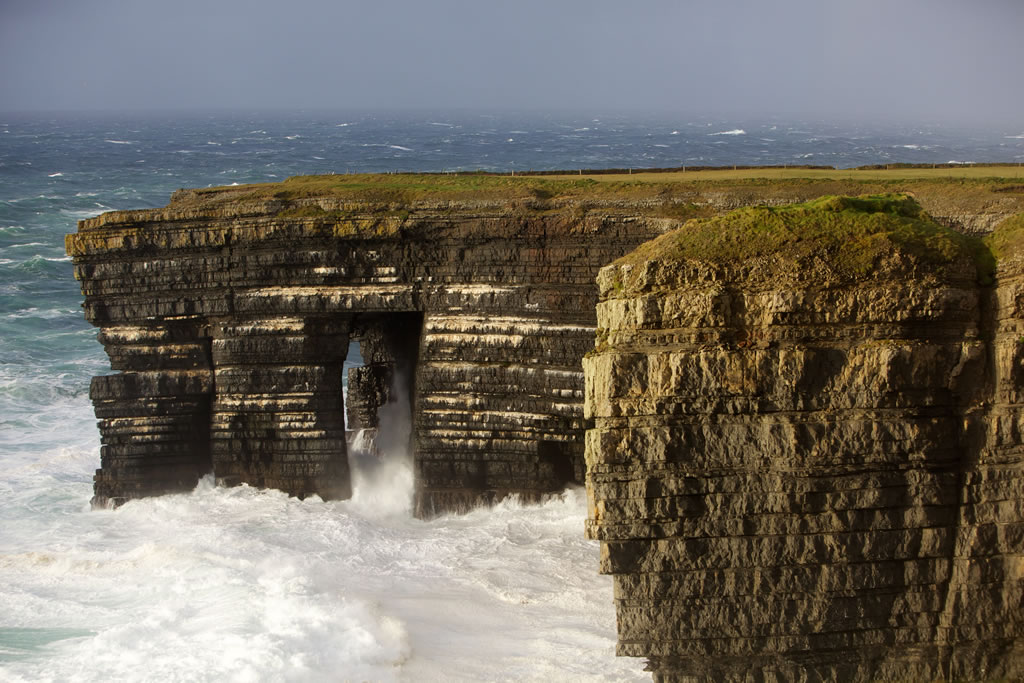 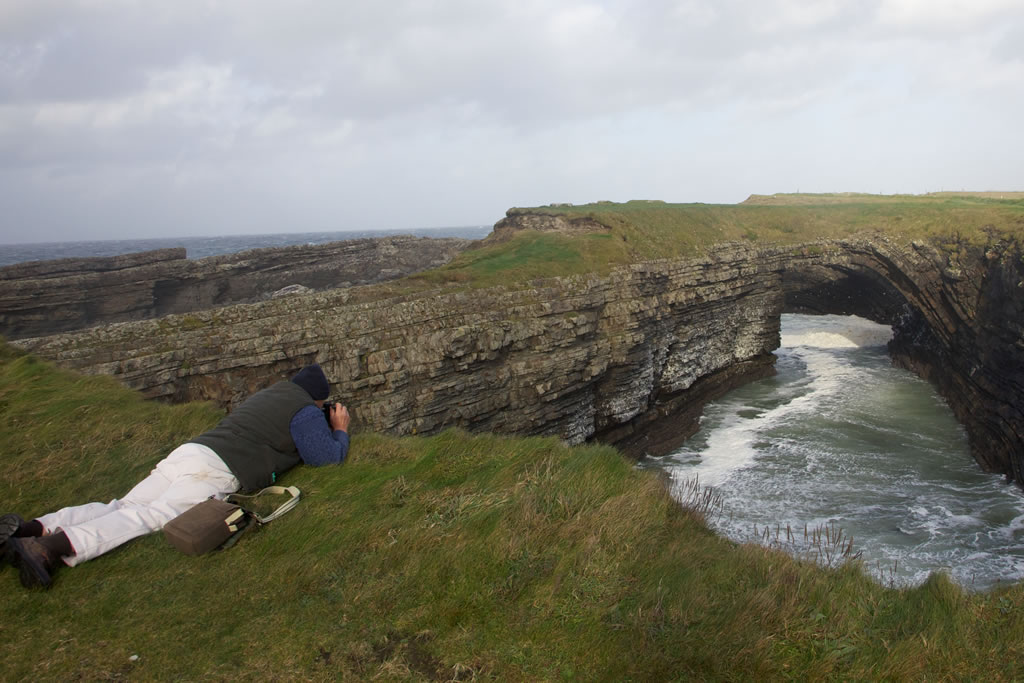 My father lying down to photograph the bridges of Ross

Dad stands above the bridges of Ross 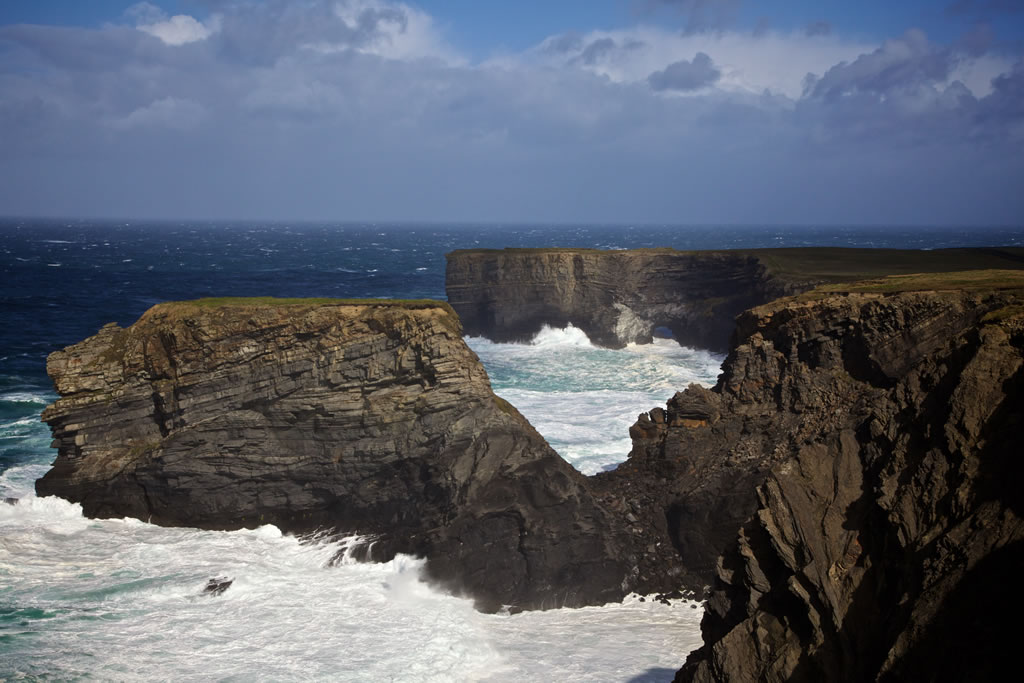 Arch in the distance near Bridges of Ross

On Tory Island fences or signs are not needed, to say it’s dangerous. It’s presumed to be. If you have made it this far, you are well aware of the consequences and probably more importantly your own mortality. The Tory arch stands with grace, a reward for the trip taken from the mainland. The island is ideal for finding solos and quieten the soul. An open landscape with razor edge cliffs, shaped sea stacks galore and the impressive natural arch. 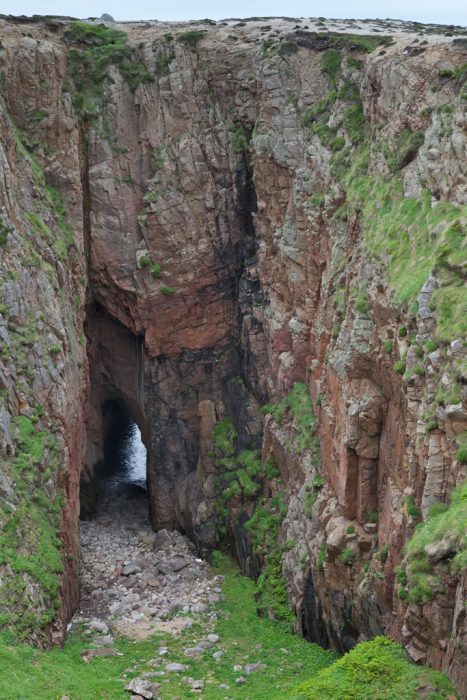 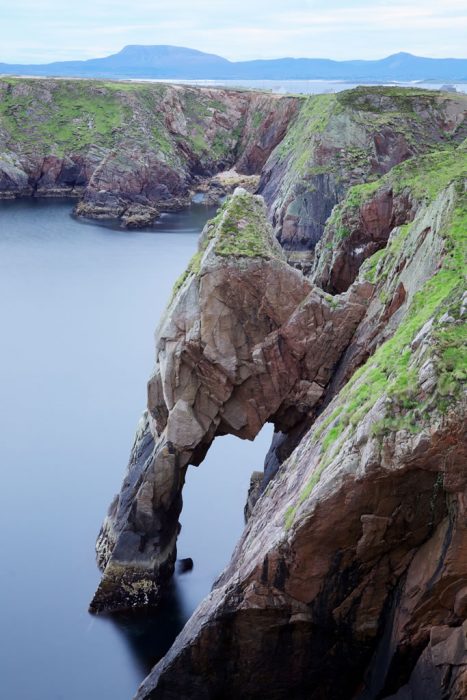 Me photograhing the small inlet arch on Tory Island

Two splendid arches waited for us on the Beara Peninsula on the County Kerry side. Beara shares its borders with Cork and Kerry. The local map just marks a yellow star and says nothing more. It took awhile to find. An old cottage gate stood on its own. Its paint flaky brown was a possible hint. Along the hedgerow where the arches might be accessible. Having passed the entrance too swiftly. The car was set to rest safely in a space along the narrowest of roads. Trekking back and over the soft grass trail led to the sudden hole in the ground. A massive oval opening spread out to the arch in the distance. While sea was just beneath us and under us another arch. 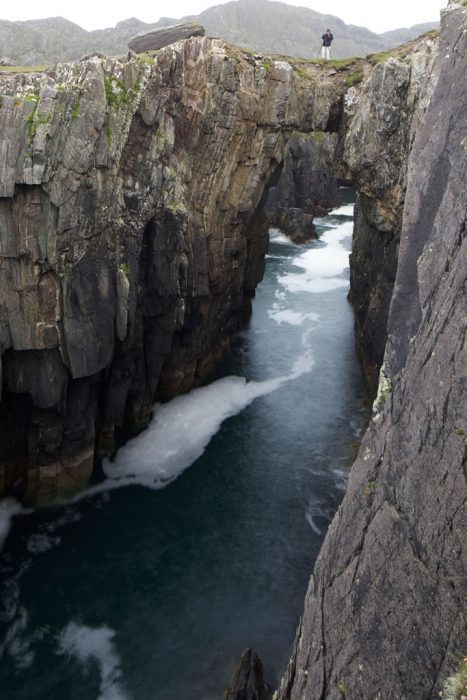 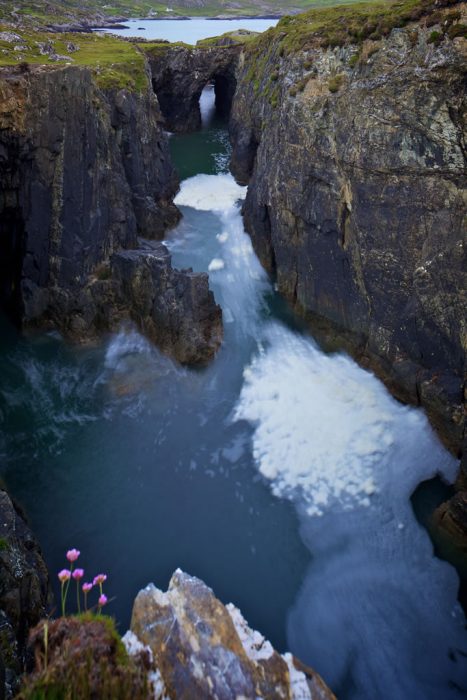 Other Sea Arches Found in Ireland

While unfortunately many arches don’t lend well for photographing they still hold their own for discovery. Each arch journey undertaken has a story at the end of the day. Usually about getting lost, nearly trapped or walking too far is often the central theme over a pint and a good meal. While the weather, the terrain and the ocean played their parts too. It’s a reminder to give equal respect to them. These temporarily monuments are subject to the forces and events of nature as we are too but with a shorter span. 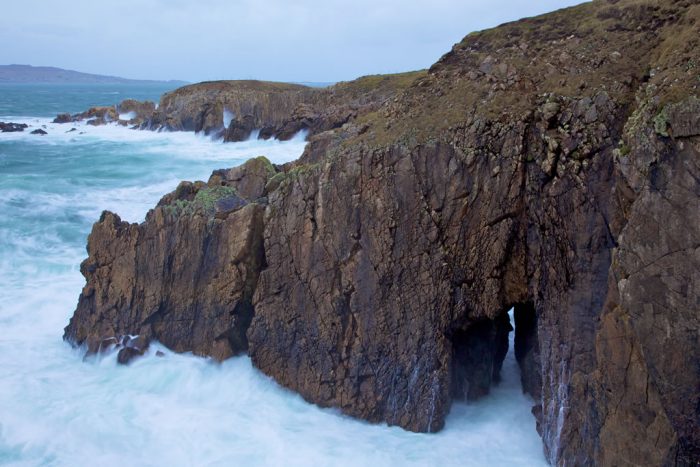 A small arch on Beara Peninsula 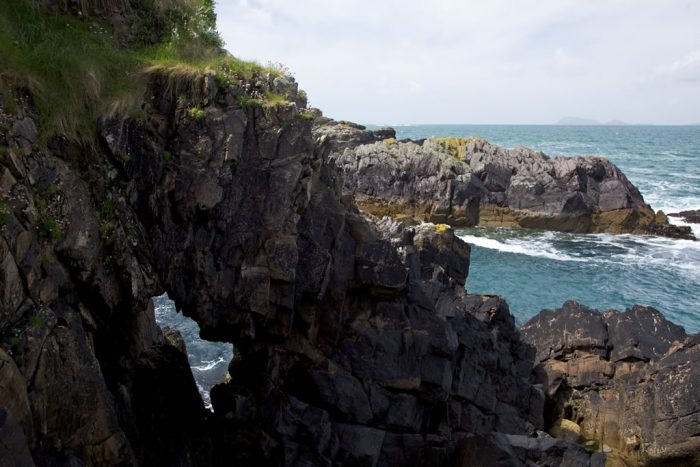 The small arch up close on Beara Peninsula 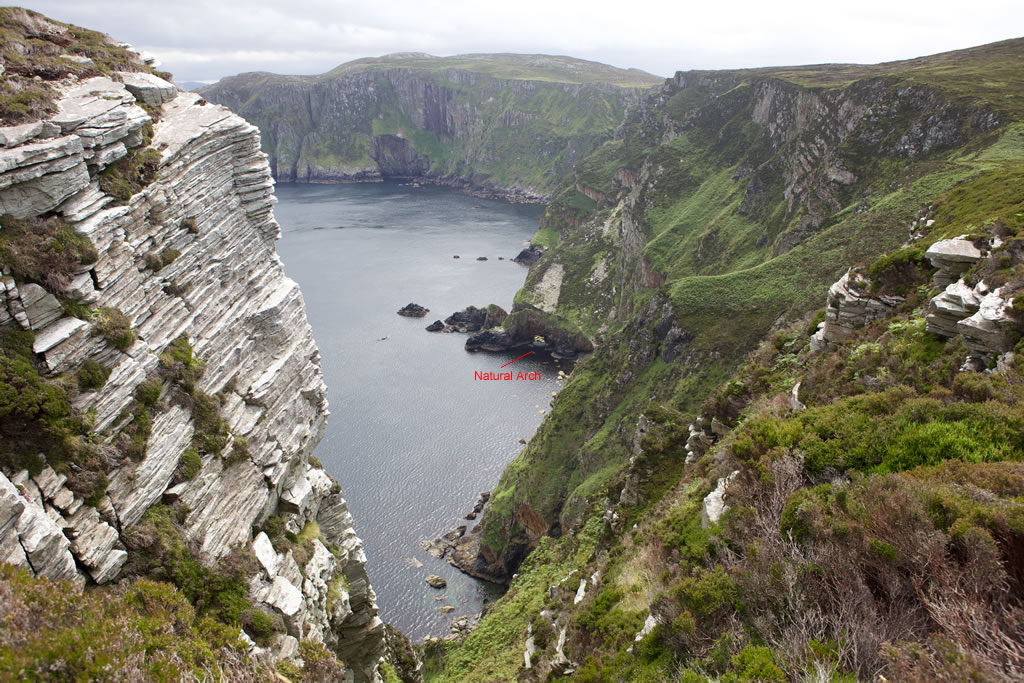 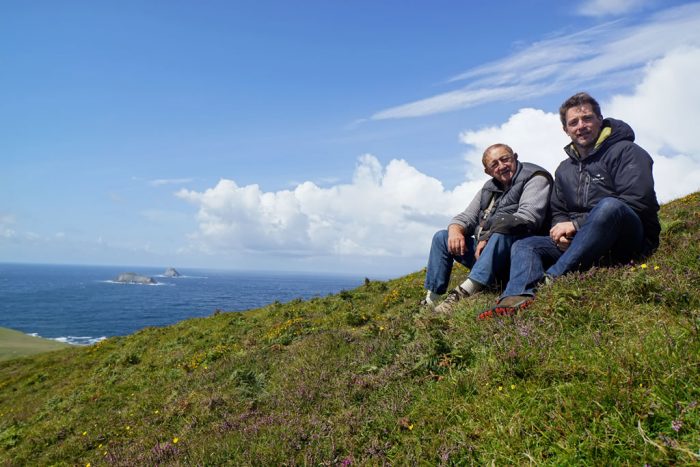 Dad and I, On Dursey Island searching for sea arches once again…

What a beautiful post. Thank you for braving the elements and nature to get these amazing shots!

Thank you very much Shae!