On my travel to Marrakech in the walled city of the Medina where the Souks with their talkative market traders and dealers one can still find the glimpses of old. If you can ignore the scurry of motor scooters as you jump to one side every minute or two. This world will open up in front of you. Looking into doorways and lanes only to discover how things were made and repaired centuries ago.

A Berber musician plays his guitar. I suspect he is the keeper and minder of the oven. I don’t wish to disturb his playing, he is strangely happy to be photographed no doubt he wants a small contribution. The traditional oven of the Hamman which he guards, heats the waters for the ancient baths.  Baths where the men and women shall never meet. As they are assigned appropriated blocks of time from early morning to late evening. The women tend to have the afternoons. 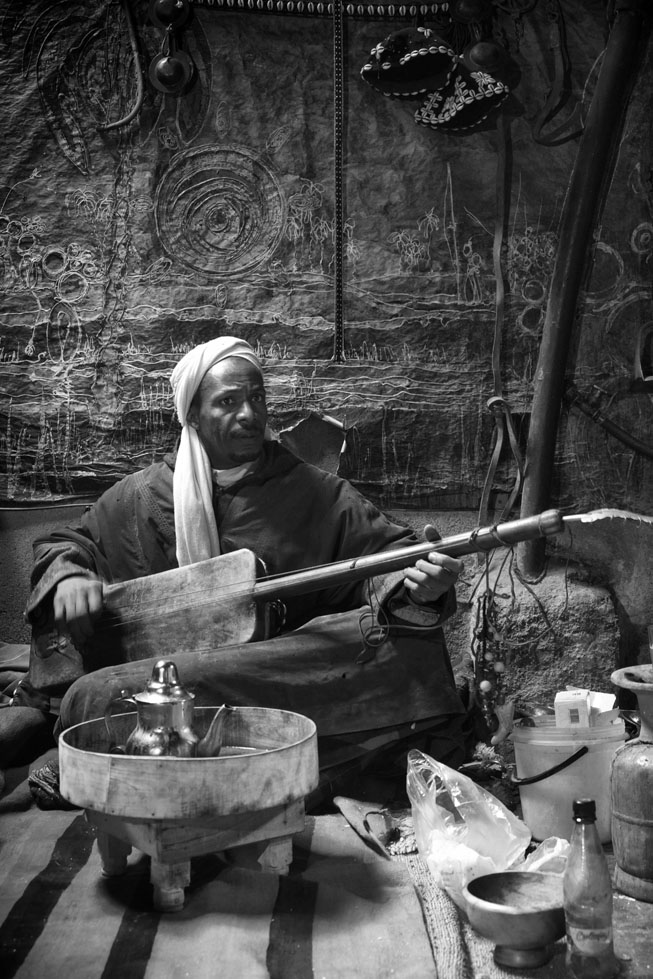 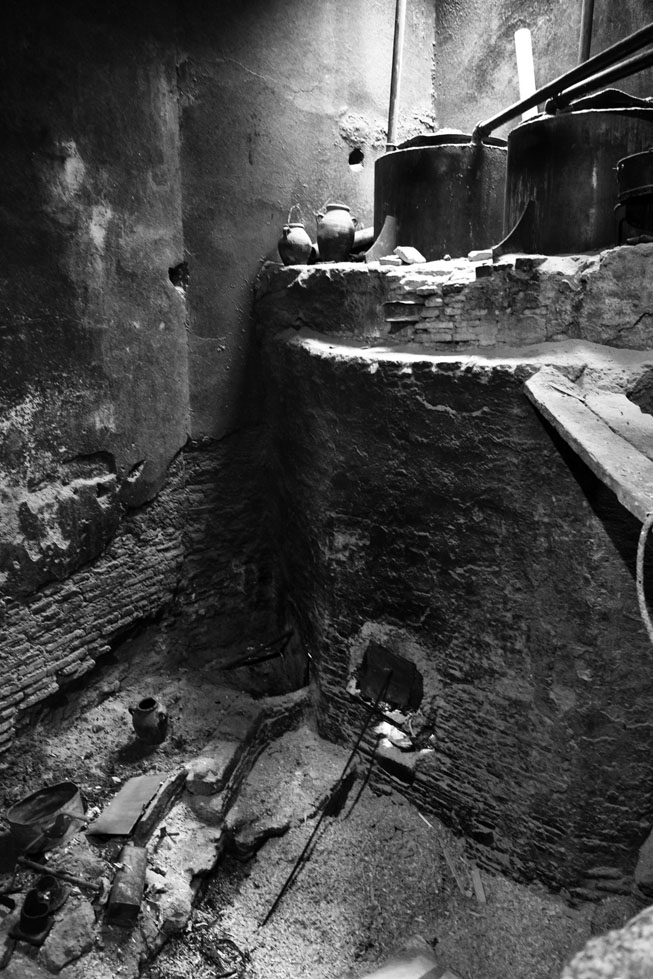 Koutoubia Mosque at night stands higher than all of the buildings in the Medina. When you do get lost within the Souks and you will certainly. The Koutoubia’s tower is a good reference to re-orientate your direction. But be careful not to get led astray by the young boys who will tell you the wrong direction. From my experience this seems to be an old tradition passed on through the generations. Even the youngest of boys will try to doop the unsuspecting traveler and tourist to get further lost and deeper into the Souks. Where they’ll be persuaded to buy wares in return for an exit of passage from the ever winding Souks. But if you can stand up high enough then maybe you see the Koutoubia and find your direction. A good tip is to take a break in one of the local eatery which offers a rooftop terrace and there you maybe discover which way is home. In the end it’s all an adventure!

The ladies in the Spices square within the maze of Souks is where they crush and pound the henna plant into the famous dye. In each and every place along the streets of the Median henna tattoos are offered by the women. The henna tattoo business is solely a female trade. As Islamic men are not permitted to touch another woman in this way. 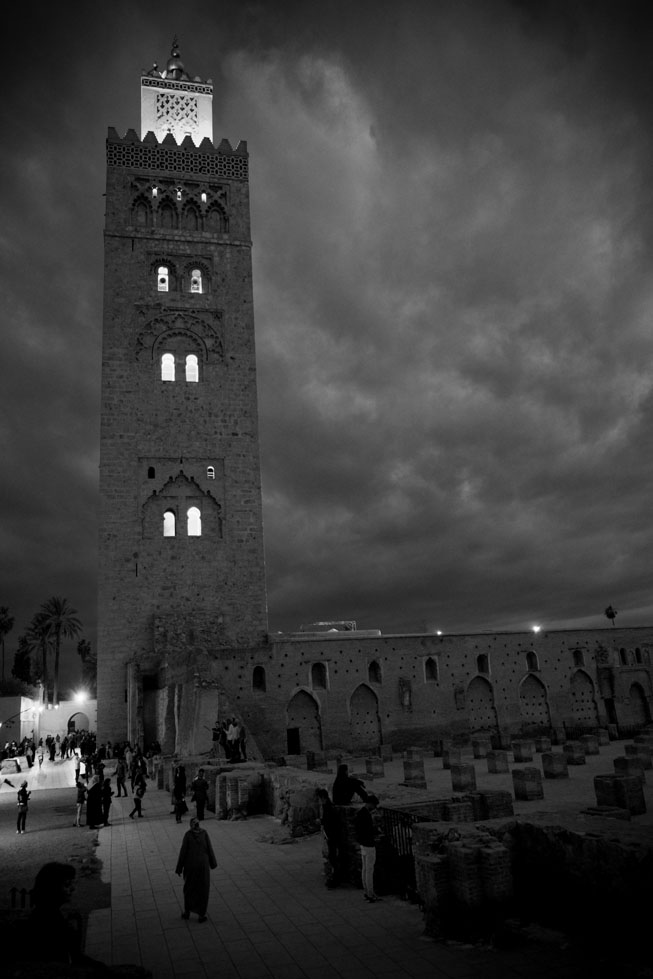 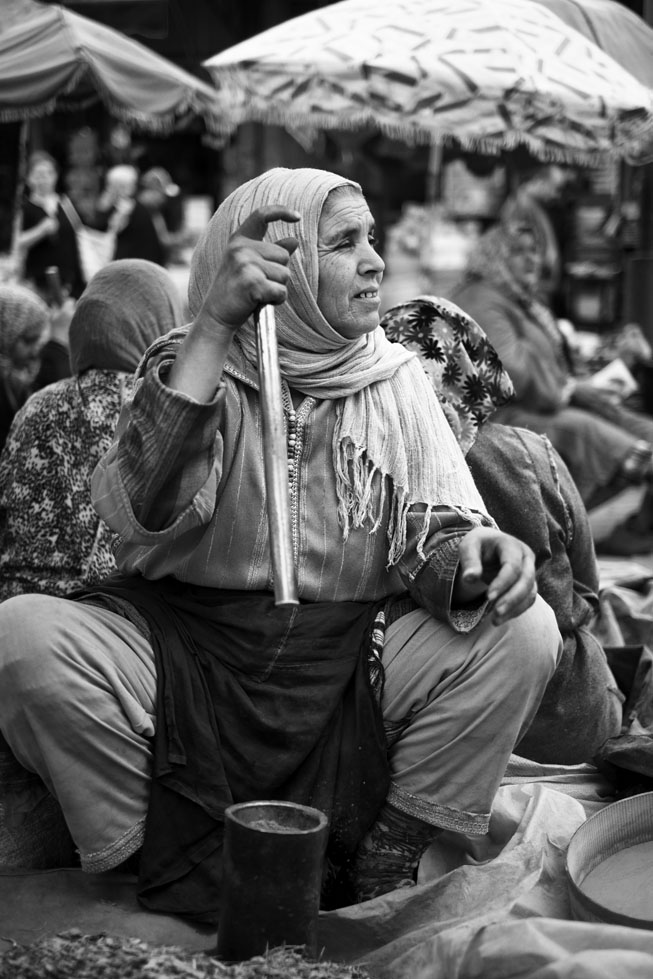 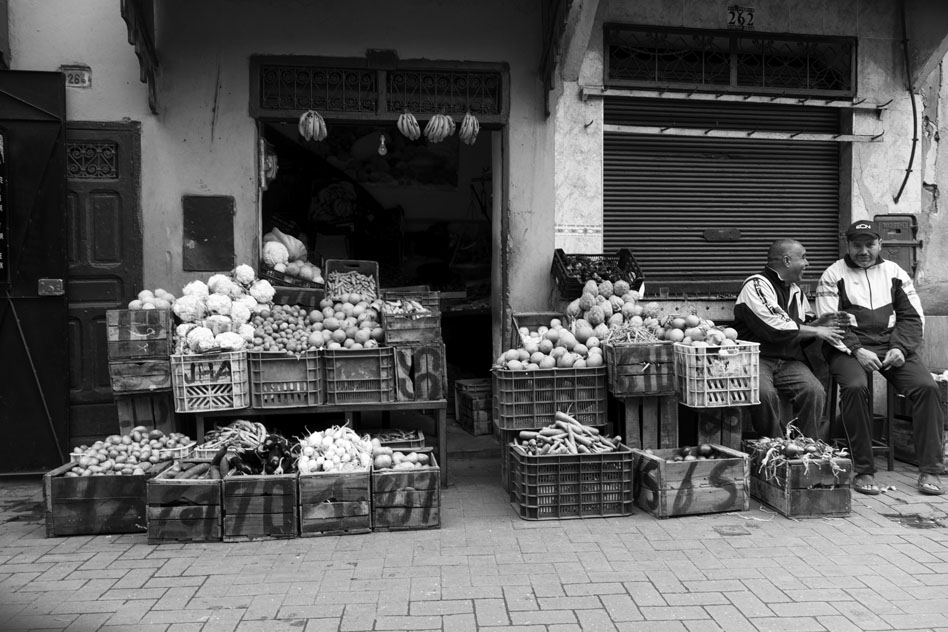 The fishmonger chops a Tuna fish into cutlets at the vegetable market in the Marrakech medina.

Transport within the Medina using hand pulled carts which rattle along the narrow streets within the old citadel. Often goods are stacked nearly to 3 metres in height – anything they can carry or get away within! The second images of a Berber man entering one of the gateways of the walled city of the Medina. 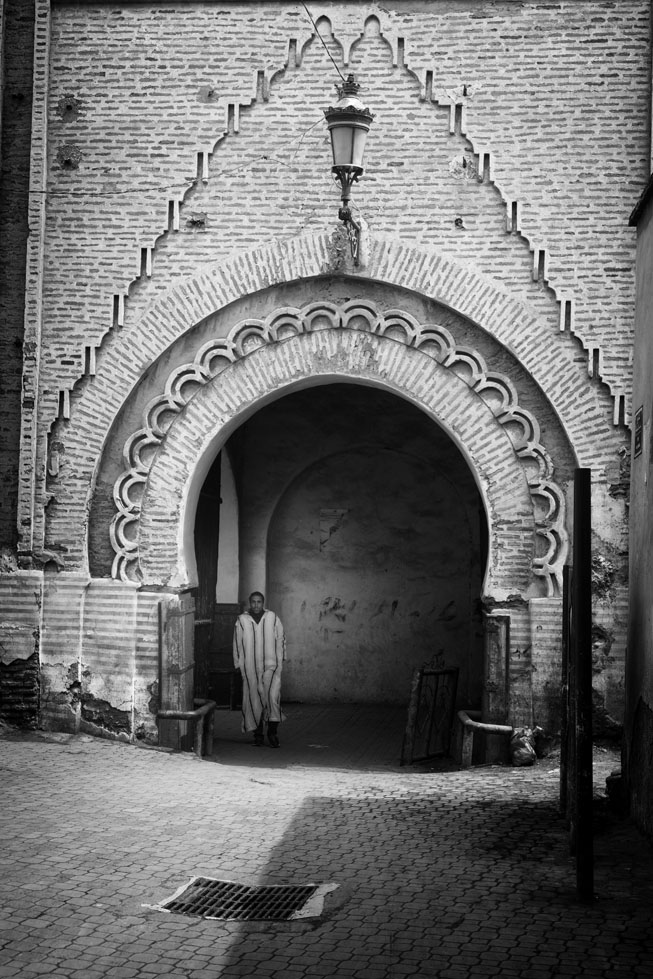 A woman prepares the mint tea on a gas stove for her guests who have arrived. 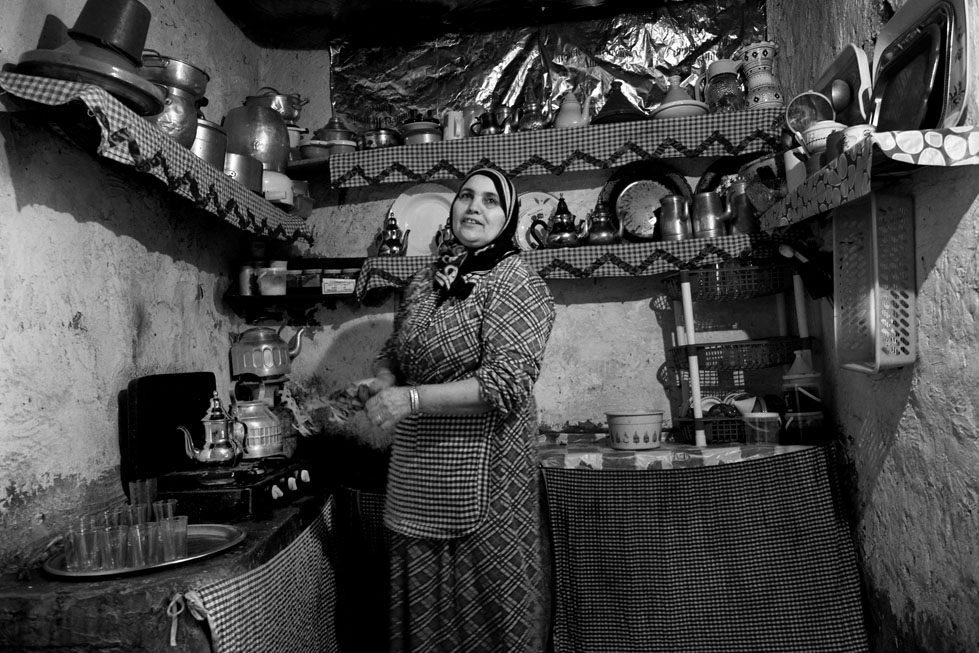 At Tannery a labourer removes the leathers from one of the pits of ammonia.  A tile maker works in the once Islamic school of the Médersa Ben-Youssef. Until the 1960s it housed and taught students within it’s magnificent tiled and craved walls. 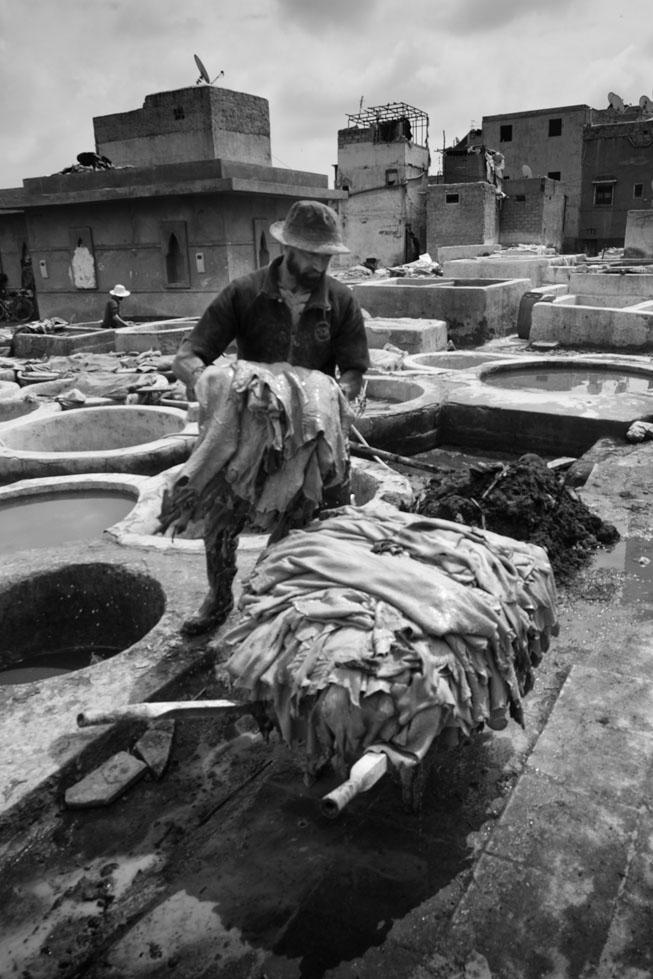 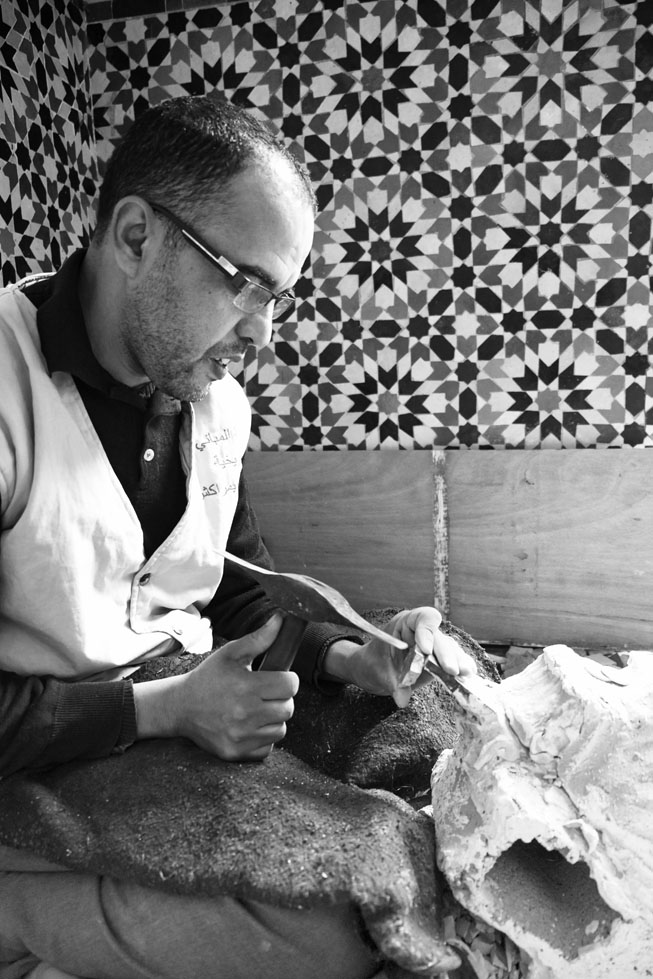 The snails to eat. Once cooked and served they aren’t too bad too eat – believe me! 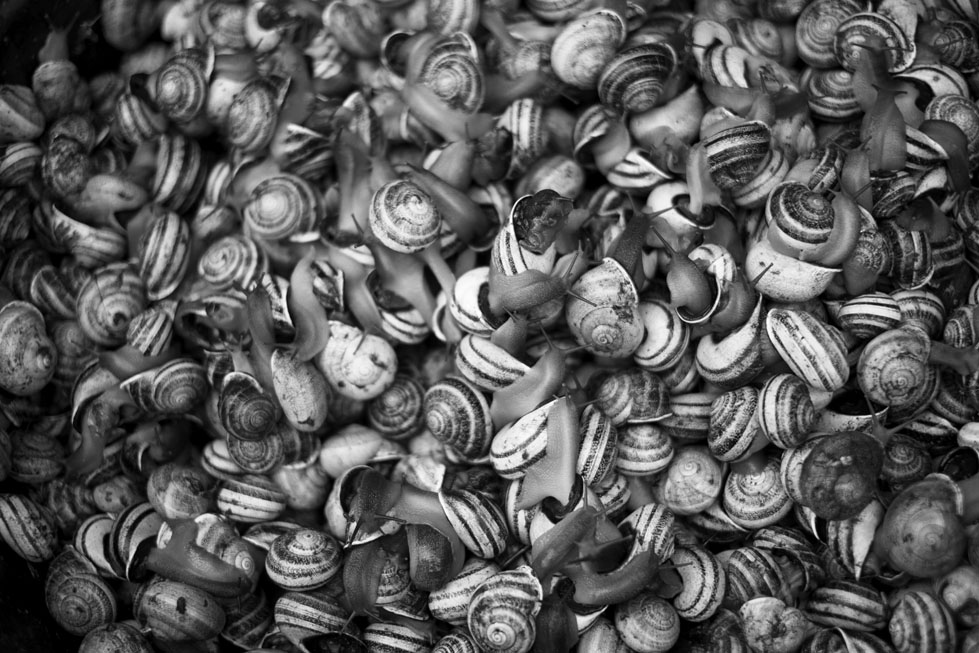 Piles of orange boxes left to be reused for the next season. 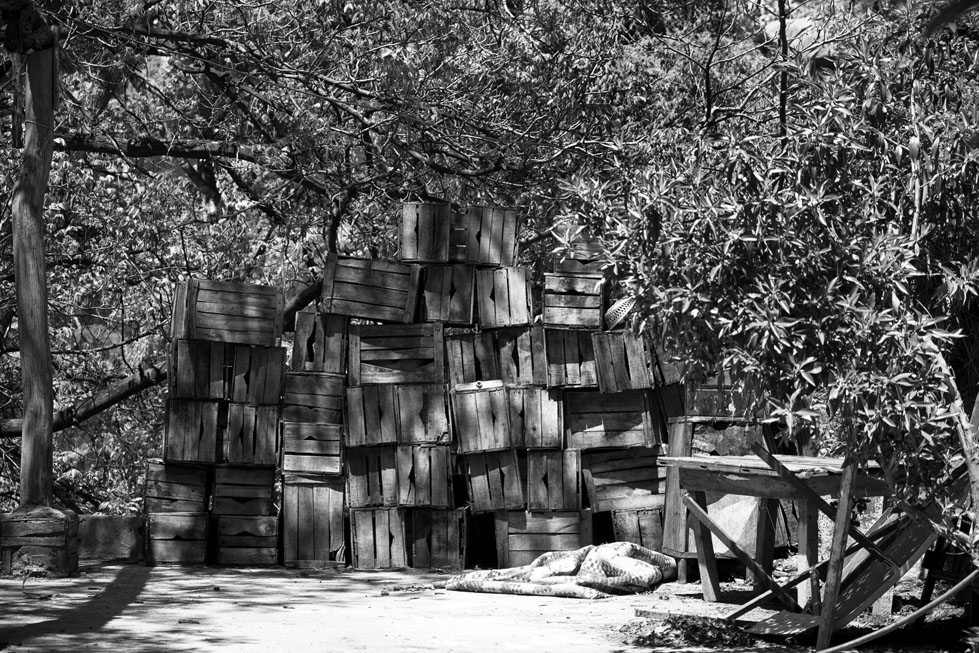 The kind fishmonger explains the Tuna fish to me in french. He is happy to be photographed and have conversation. 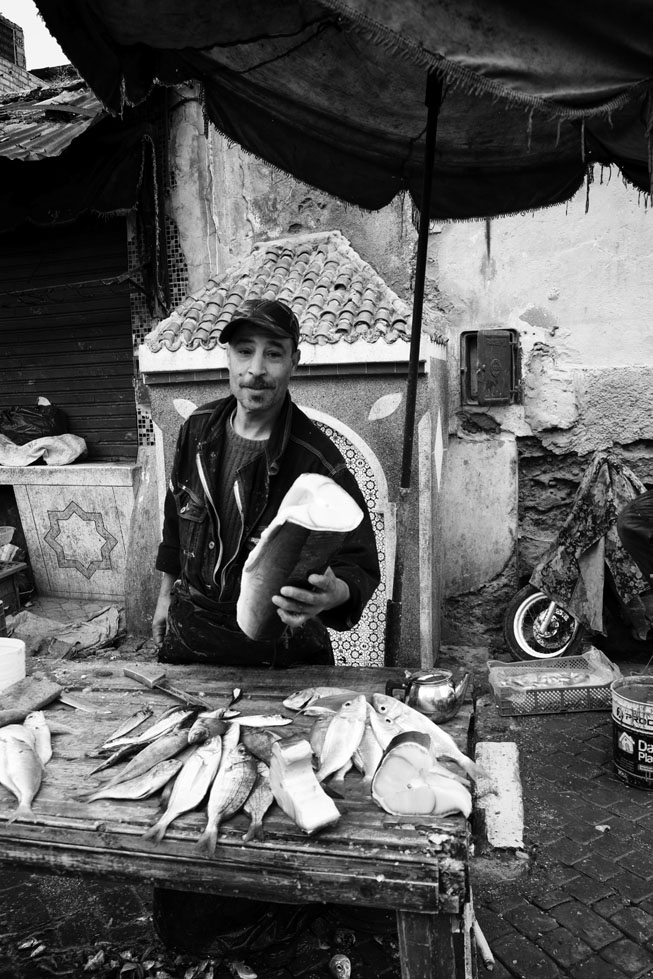