Later in the day after we’d returned back to Keel the village on Achill Island. The island is part of county Mayo connected by bridge. While the sky was quickly coming to a close with its temperament, we were left with a blessed day of photography and company – of course.

However the story began early that morning. When my father and I ventured out to seek locations that might lend themselves to being photographed. The weather was unforgiving at the start of the day. Typical for this time of year but patience would hopefully award us through the course of the morning and later with the afternoon.

The first on the list was a call to Keem bay, where the road on Achill lsland pretty much ends. Its sands near white and the ocean pale and clear. The rain came after 10 minutes of setting up tripods and camera. There was some folks fast asleep in their camper vans in the carpark, so I guess we were early – first light. Believe me I think they were the sensible ones! Nonetheless a fleeting moment was grabbed and then a dash back to car from the sudden horizontal rain for breakfast and coffee. 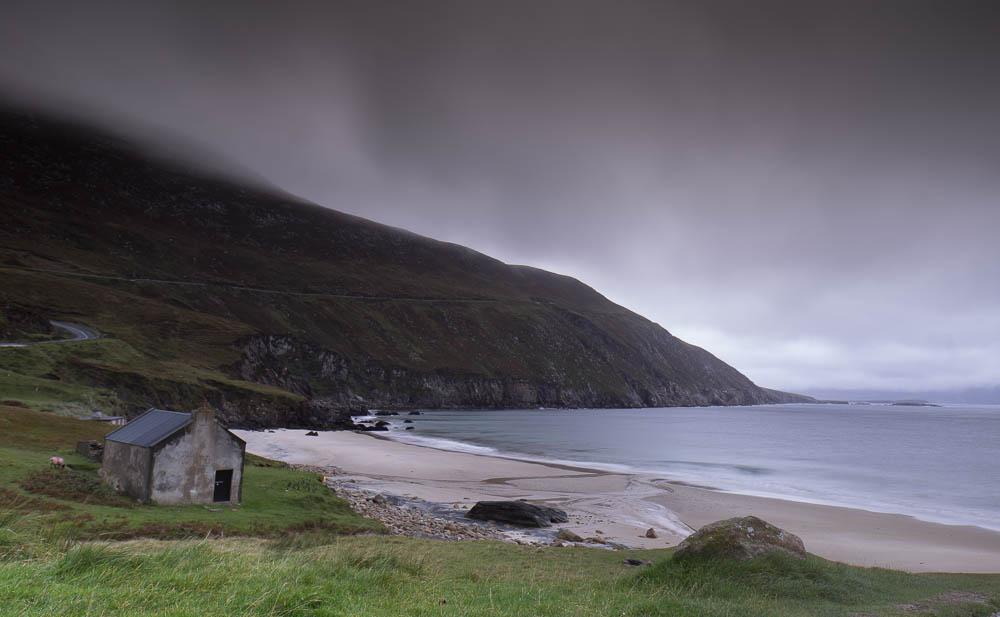 Later on just after returning from a quick recharge at the guesthouse. The weather had cleared and presented itself with a changeable pallette of clouds and light. The light had gathered and now was illuminating across the face of Slievemore (672m).

The island is mainly peat. Bog cutting for turf under the Slievemore mountain was a challenge to capture in terms of angle and the light show ever changing. Getting the right position with the tripod prove quite a task with the soft bog earth beneath. It was necessary for the small aperture needed to get the image below.

A small row-boat on Keel Lake,
the water sluppering gently as he rowed,
the easy sh-sh-sshhhh of the reeds
as we drifted in, and all about us
tufts of bog-cotton like white moths,
the breathing heathers, that green-easy lift
into the slopes of Slievemore. All else
the silence of islands, and the awe
of small things wonderful : son,
father, on the one keel, the ripples
lazy and the surfaces of things unbroken.
Then the prideful swish of his line
fly-fishing, the curved rod graceful,
till suddenly may-fly were everywhere,
small water-coloured shapes like tissue,
sweet as the host to trout and – by Jove!
he whispered, old man astounded again
at the frenzy that is in all living.

from “Manhandling the Deity” by John F. Deane  – http://www.johnfdeane.com 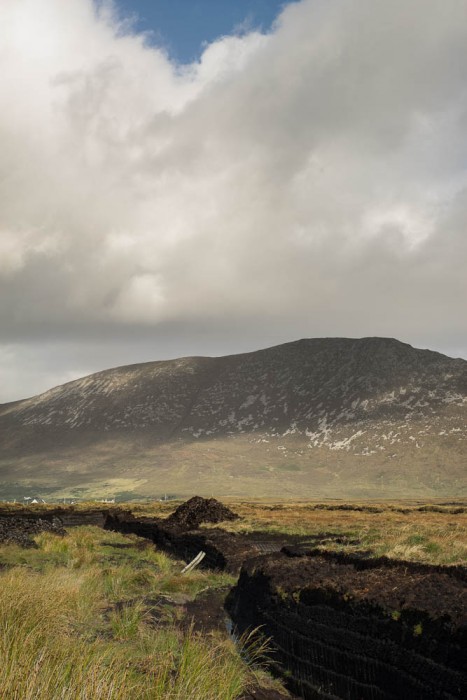 Proceeding onto the Atlantic drive route, the clouds had risen leaving us with a dramatic land and sky revealed. As we drove from Mveelin into the village of Dooega we’d come closer again to the coast. Hopefully there would be more landscape opportunities to photograph. 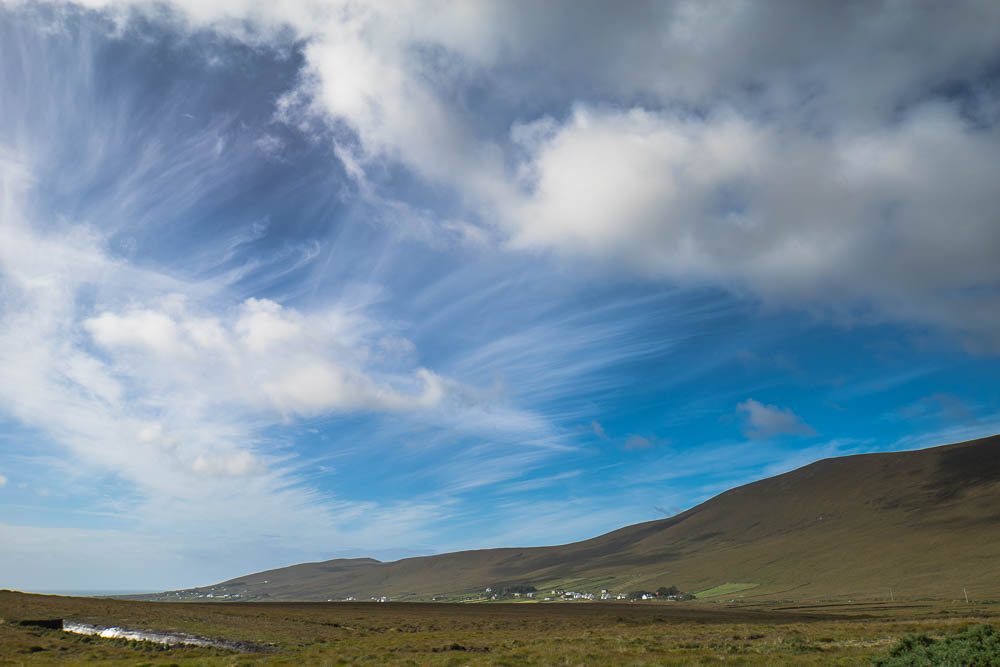 And naturally there was. After Dooega, within the background, the shapes of the coastline with the light spilling across the slopes above had given us some photographic gems to retrieve. 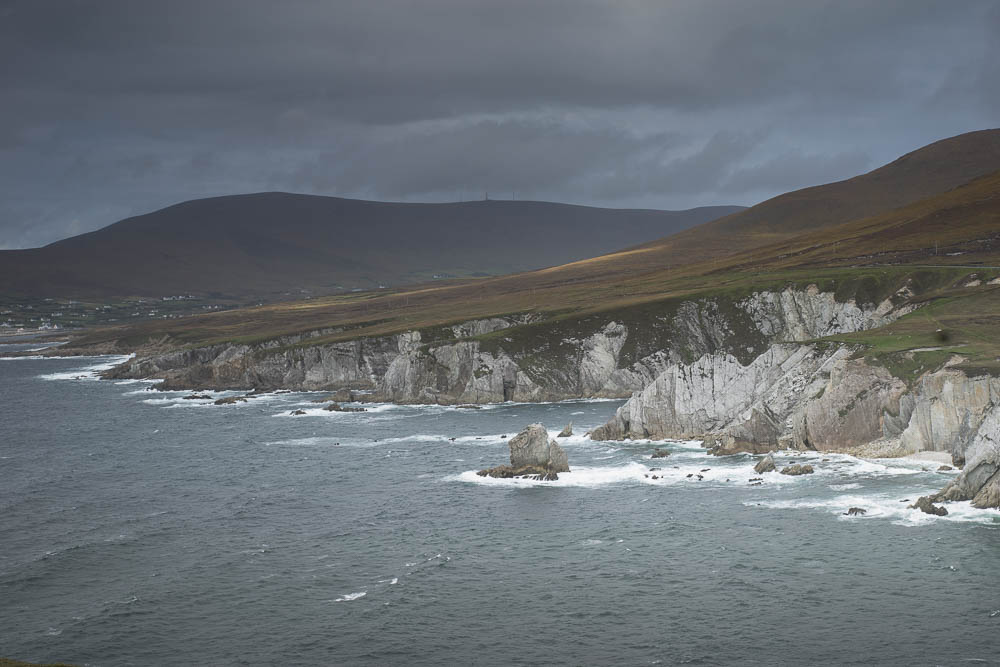 Eventually the mood of the sky had changed. The light now much more softer than before had warmed up the bay giving us a chance to collect it up with our cameras. 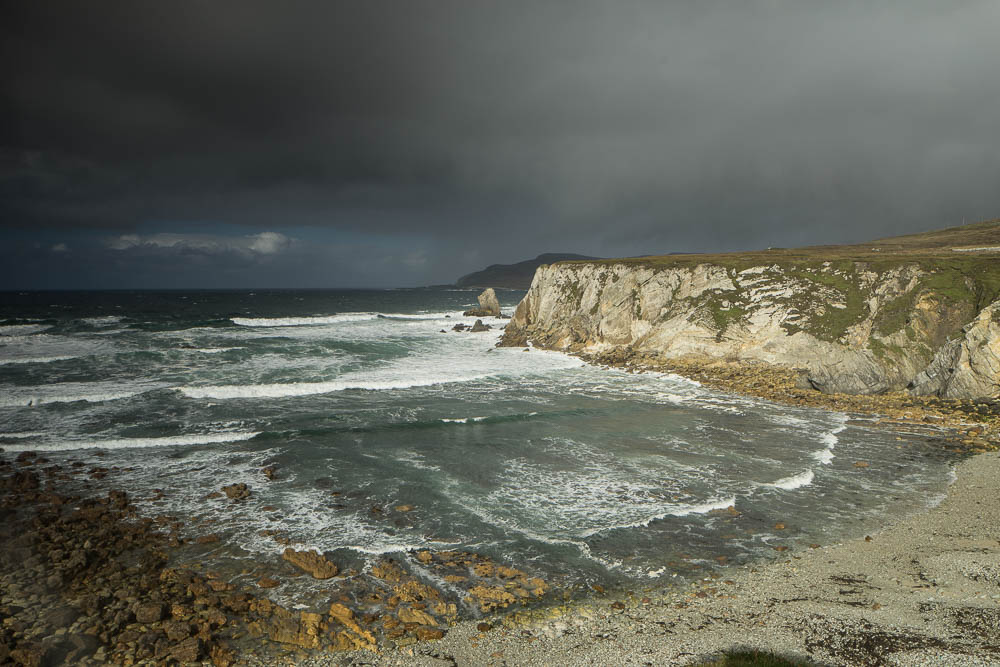 The next day the light was more stable but rain showers competed with the little sunshine that was available. However we did manage to see and visit Grace O’Malley’s Kildamhnait Castle

[pullquote align=”right”]Grace O’Malley’s Kildamhnait Castle is a 15th-century tower house associated with the O’Malley Clan, who were once a ruling family of Achill. Grace O’ Malley, or Granuaile, the most famous of the O’Malleys, was born on Clare Island around 1530. Her father was the chieftain of the barony of Murrisk. The O’Malleys were a powerful seafaring family, who traded widely. Grace became a fearless leader and gained fame as a sea captain and pirate. She is reputed to have met with Queen Elizabeth I in 1593. She died around 1603 and is buried in the O’Malley family tomb on Clare Island. Source:Wikipedia[/pullquote]

Above it all the panorama of Achill Island with its pristine stretch of strand the hills and Slievemore in the distance. 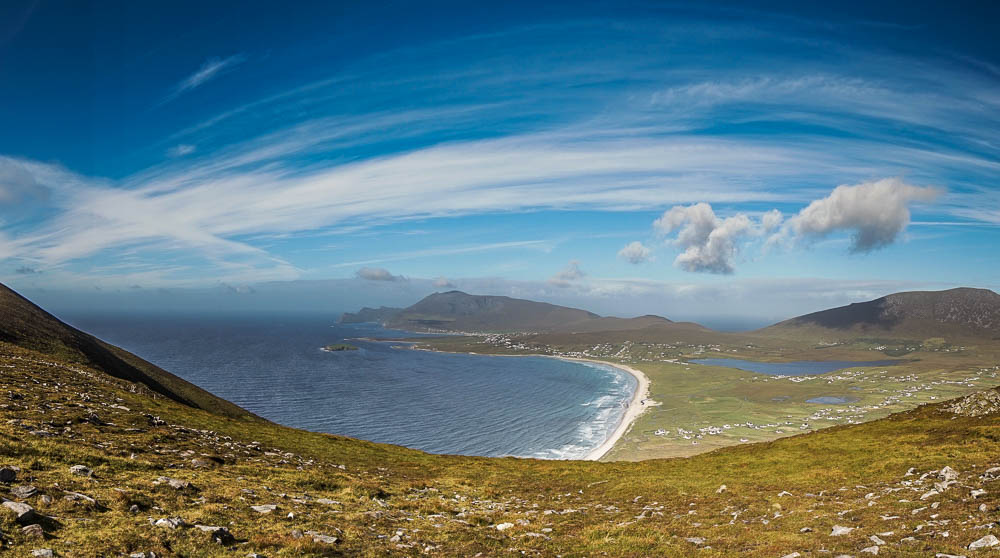 My father with his camera checking out a location to make the next picture.

While traveling around I noticed quite a interesting art studio very different from the norm. Unfortunately at the time it was closed but I’m sure next time I’ll definitely have to make a stop.  The place in question is Red Fox Press, books, polaroid projects, poetry other quirky wonderful things.

Richard Thomas Lyons. My father George Rutherford Lyons and grandmother Belinda Sproule Lyons visited with Tom and Maude Watters and I have some photos of them and Bridget from the 60’s. My grandmother was Maude’s sister. She married a Lewis Lyons whose family came from the Achill Island area. my great-great grandfather was Patrick Lyons. I am interested in connecting with Lyons, Sproule and Watters descendants as I am setting up a family Facebook page for those in Ireland, Australia and Canada