Sunset on the Tre Cime is an amazing experience, especially sitting on a landscape surrounded by the sheer awe of majestic mountains. I was there as the sunset made it’s color across the sky. Watching and capturing with my camera. I had the joy of being the last one at least on this side of the three peaks.  Otherwise known as the Tre Cime. They stood high behind me while the sun gave a purple display with various hues across the jagged spike like tops of the Monte Campedelle

This was my first time to the Dolomites, let alone the Tre Cime.  During the days up to the main event I had hiked and visited lakes and other mountains. Carrying along the Fujifilm GFX50s which happens to be a digital medium format camera. While I enjoy hiking, nature and photography it is when theses are combined that it offers such solace for the mind and a sense of achievement.

Day one of four in the splendid mountain range of the Dolomites is to be found in South Tyrol, Italy. This would be the begining of a great adventure. I was not knowing what to expect along the way.

It was the end of autumn, and the start of November. Still the snow hadn’t fallen at least not significantly. The last of the leaves and the yellows of the pines were quickly letting go for the winter.

On this morning the sky still hadn’t produced a cloud. It has being like this for a couple of days now. The opening shot for my trip was taken at the Lago di Landro – A reflection on an icy lake.

Later I moved on and explored other possibilities. I figured I’d try out a hike to Lago di Sorapis.  But before I commenced I noticed some splashes of light on the ground of one of the small peaks of the Cimon del Froppa. Sadly still no clouds. As a landscape photographer a little cloud on a blue background is always welcomed in making images. But unfortunately none were to be had so far… (but that would change later in the day).

Now I had seen the shots produced by other photographers of the lake Sorapis so I had hope and expectations. This blind faith encouraged me to hike 5 hours to the top. I surely was glad of the flask filled with fruit tea that kept me not only warm but my spirits believing in the image.

The Sorapis lacked water and only offered a corner portion of blueish ice. I guess next year’s summer schedule will need to include a repeated visit.

After a strenuous task of boot crawling yesterday with all of the photo equipment and tripod, it was time once again to tackle another pocket of the region. I had arrived early. Unfortunately the road up to the Plätzwiese was closed for road work maintenance. Well I thought to myself, “that wasn’t going to stop me at all”. The clouds were gentle wisps rising and dancing softly across a deep blue sky. This could be as Lou Reed’s song says a “Perfect day”.

It was a perfect day in terms of light and location. A blessing no doubt.

Afternoon of day two, I wasn’t entirely sure if I should take the road up to the Tre Cime. The weather particularly the skies weren’t behaving themselves at least not like they had in the morning.  A landscape photographer has many wishes and weather would have to be on the top of that list. Basically it had gone dull and overcast, not much action or drama going on. It was time for Pizza!

Then, just then at about three in the late afternoon the heavens cleaned their act up and started to give the prospect of something that might actually happen. I ventured a return visit to the Lago di Antorno. This lake is before the toll road up to the Cime Tre – a freebie if you will.

Once I had finished a couple of shots at Lago di Antorno, it was time to try out the three peaks a.k.a the Tre Cime.

You can pretty much drive to the base of this mountain once you’ve paid the toll for the road. Of course after that there still quite a walk along the path to reach a suitable point to make images of the peaks. Good boots and warm clothes are essential here. After a good hour of walking at a rapid pace to get the last light of the day. I was there beneath the peaks although not on the more famous typical side but nonetheless I was there.

I made a shot of the valley for a warm up shot then pressed on wards.

Having visited this lake for the third time now, it was now time to try again. (Yes, that how it goes as a landscape photographer, repeat visits to the same location to get your vision down in a photograph.)

This time I would team up with two other landscape photographers. Arno Hemmer, Florian Warnecke and I would continue together to scout out places and of course naturally to make images over the next two days.

The Barbian waterfall is to be found in South Tyrol on the way to Saint Ulrich which would be the evening location. I had decided to visit a waterfall as the opening of the day was overcast. Cloudy days are the best for photographing water if you wish to see all the details in the rock structure and water.  Armo and Florian wished to see the Earth Pyramids. There are interesting but I had seen them before on an another trip. 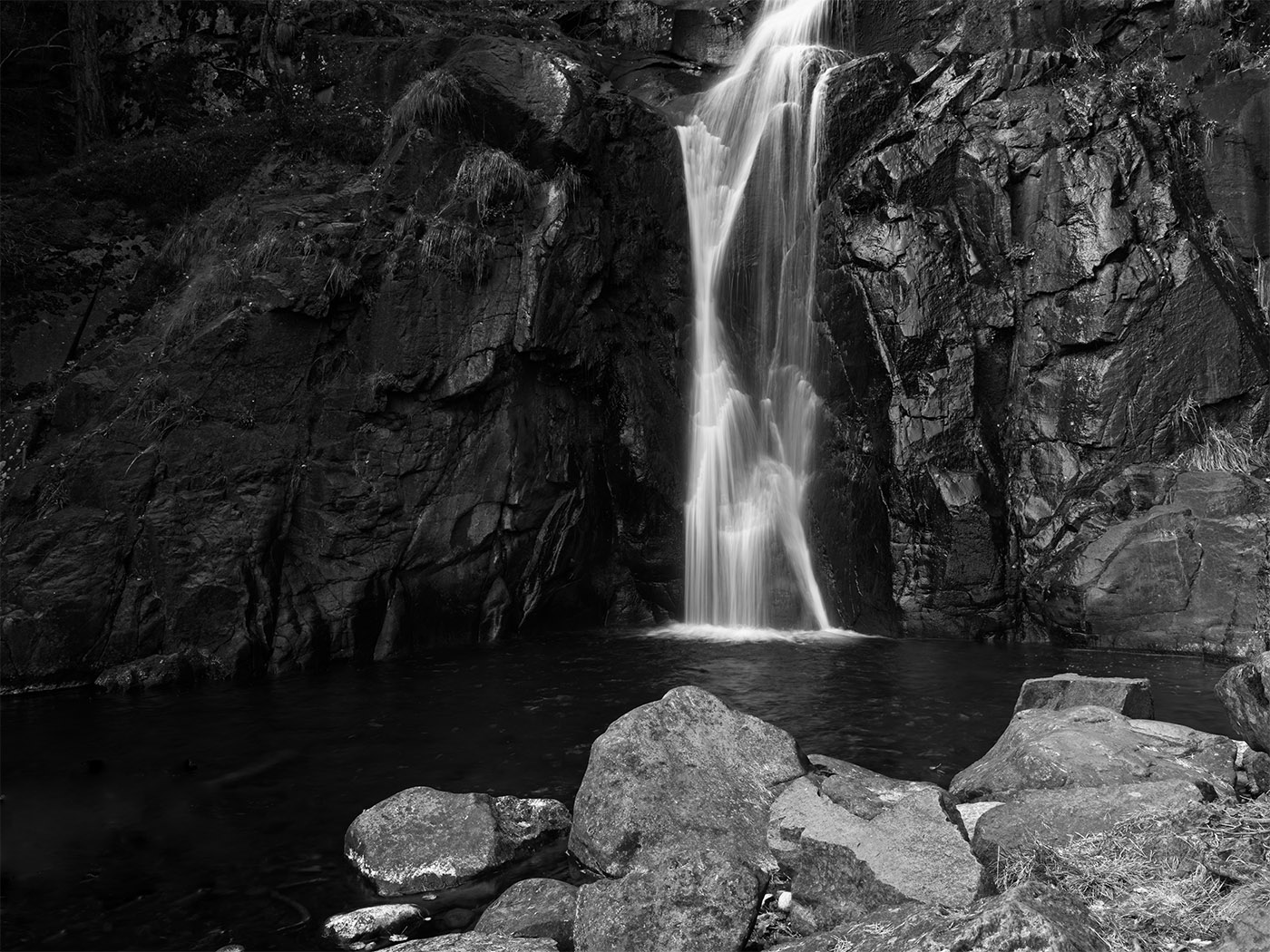 This was it, the last light of the day was upon us. Us the three photographers rushed and raced to found a point to capture the purple and orange hues. The colors were leaving us every second for the as night’s cloak began to settle. Tripods were hoisted, lens and filters were set to place this amazing view and effect into our camera’s memory for all time. This photograph was very much a fleeting moment. The excitement and concentration was intensified by our quietness and seriousness against the retreating light.

Dawn rose along with a trio of photographers invading the hills of the Passo Sella.  Well no one else was there, it was just 6 am!

Later that we’d photograph for the last time together the mountain called the Rosengartenspitze.

All in all the Fujifilm GFX50s performed impeccably. It was my trusted workhorse along with the Fujifilm 32-64mm WR f/4 lens. The Fujifilm camera is really quite a feat in terms of technology but more importantly a tool well suited for landscape photograph. Very chuffed indeed.

Gavin,
You are posting some really great content here lately, keep up the great work. Very jealous of the new gear and love the way you are combining it with the vintage lenses. Most give some proper time to digest these recent posts on a big screen.
Regards
Kieran

Thank you for your complements. Your back garden, the Copper Coast is a great and very understated location in Ireland for photographing landscape. Hopefully I’ll get a chance to go back to Annestown in 2018 and make some more images. By the way really like your B&W images from this area.