Autumn has crept up on us as the summer fades, the leaves on the deciduous trees have started to change colour. However the woods are still plenty full with mushrooms to forage.

The location of the Parasols that I had visited two weeks ago had one left. It was mature and no longer fresh to eat. I retrieve the specimen and placed it into an open cardboard box with the cap top facing down. Collecting parasols is a delicate operation to keep them intact, so a basket or a box is very much recommended. As I wished to make a spore print the box was an essential item. I found two other suitable subjects which possible could be useful for spore printing. 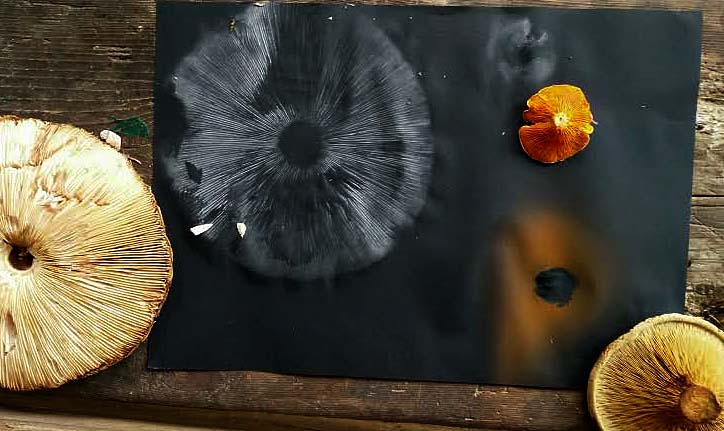 Laying a cup, top for a pot and a bowl, actually whatever cover seemed appropriate to keep the mushroom cap fixed and sitting still for a couple of hours.

The results on black paper shows two white and one orange-brown spore print. I was quite excited by the size of the print from the Parasol and naturally surprise by the colour of the Brown roll-rim / Paxillus involutus spores.

When I go to the cabin in the mountains, usually I’m running around. Collecting and chopping wood, exposing, hanging or washing a Cyanotype or Van Dyke Brown. However today being the right time of year. It was time to Anthotype with Mushrooms once again. This time, I’ve tried to make an emulsion from the Bay Bolete and what I thought was a Milkcap at first. The Bay Bolete is of course chestnut brown on top and has yellow tubes under the cap. The Milkcap which turned out to be  a Brown roll rim fungus was purely experimental.

It seems a perfect candidate for the mushroom anthotype. It bruises on the yellow part to blueish green. I had chopped it up and add a small amount of alcohol in a yogurt container. I let it sit for awhile and even added some water.

No matter how much I squeezed it through a cloth, nothing much came through. Then I tried cooking the solution for a bit. Still it wouldn’t allow itself to be juiced. ( I reckon this mushroom would be interesting to make paper from.) At the end of the day the experiment gave no defined results.

IMPORTANT NOTE : DO NOT EAT THIS MUSHROOM IT IS POISONOUS!

Because deaths by brown roll rims are so rare, the toxicity of this mushroom has not been recognised until recently. Indeed, in parts of Central and Eastern Europe it is still consumed, sometimes in great quantities.

However making an Anthotype is fine with the Brown roll-rim. If you are still really worried, wear latex gloves when working with this mushroom.

While rambling around the forest searching for Puffball (image at top of this post) to eat I came across these Brown Roll-Rim’s quite often. I cut it straight down the centre and waited a few minutes. It changed from whitish to brown then later to a dark shade of brown. I kept it and brought back to the cabin with me. I started the same procedure with the previous mushroom anthotypes by chopping the fruit body up and adding a little alcohol. I left the solution to dig in for about 20 mins. Using a spoon to mix and mash a bit, I had noticed a dark solution had been produced. This seems very promising. I began to paint with my Japanese wood brush onto some watercolour paper. I was happy and impressed with the color. Strong and bold.

I’m not sure how it will react  or reponse when used to contact print with a negative. But I left the paper to dry overnight. I made two sheets of the Brown roll-rim. I’m excited to see how this will turn out in a couple of days.

Today I seek out some more of the Brown roll-rim / Paxillus involutus. I had believed them to be Milkcaps initially,   however I now know they are the poison (if eaten) Paxillus involutus. They bruise brownish on the gills and the stem changes colour once cut. I picked about 5 of them and did a quick spore print to ensure they’re were the same species. The spore print is a dark or burnt orange to me. This match the description for the Poisonous Pax aka the Brown roll-rim.

The prepared paper has also darkened a little after drying overnight. This is a plus for making a contact print. Now that I’m back in Graz the paper and negative are stuck together onto the south facing windows. Let’s see if an impression appear after a few days.

Regarding the Ink cap from the previous post, I’m starting to see a print but it’s faint. While the Parasol print has improved a lot. The Larch Bolete print seems unchanged. So it may be done.

Below are the updates of the Mushroom Anthotype so far. (Still the ink cap anthotype  there isn’t much going on with it. Hence why I haven’t shown it below)

While the latest Anthotype the Brown Roll-rim is proving rather interesting after just 2 days. The negative is the old train image by the way.

I feel the Parasol and the Larch Bolete maybe coming to the end of their exposure. I shall give them another week and then I shall decide whether I call it a day or not.